Isabela is the largest of island of the Galapagos, but much less urbanized than Santa Cruz, it slightly kept its “wild island” aspect and it’s so good this way!

Isabela has no airport and can only be reached by boat from the island of Santa Cruz. 75 km separate the two islands, or 2 hours with a speedboat.

Just like in Santa Cruz, it is possible to do a multitude of both free and paying activities on Isabela, all of them are very pleasant.

Here are some of them.

The Arnaldo Tupiza Chamaidan breeding center is located 2 km from the center of Puerto Villamil, around 30 minutes walking. There are tortoises of all sizes, alone, in groups, or even taking a bath!! 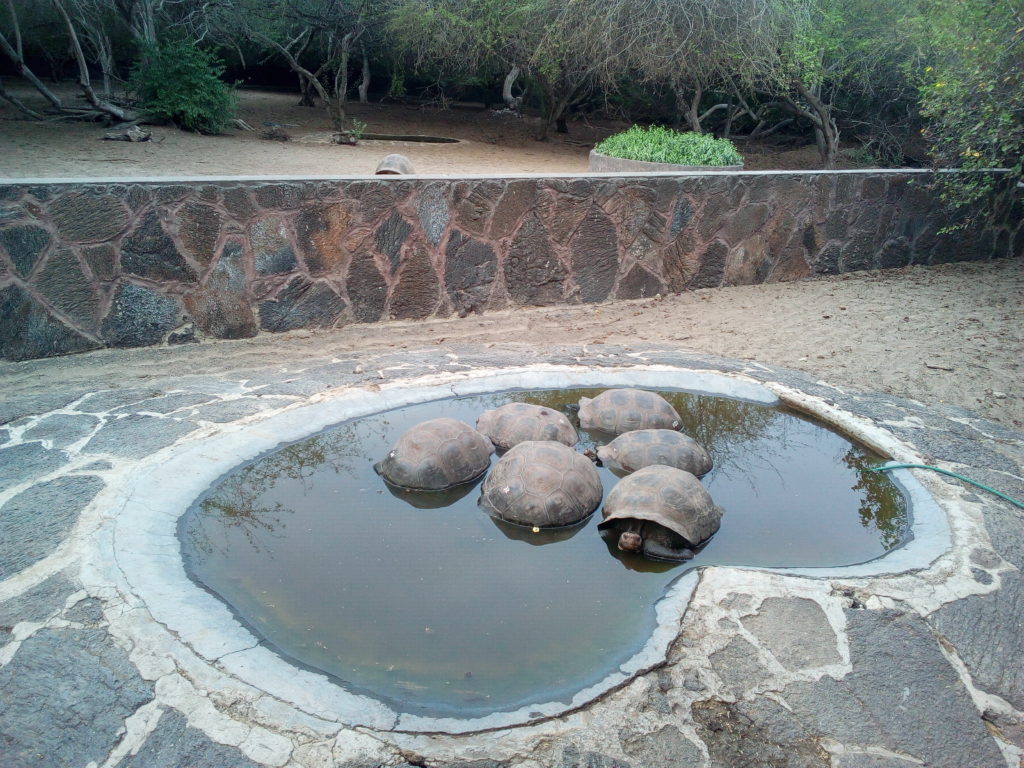 There are some explanatory panels, the place is well maintained.

I found myself by mistake in the part where they raise the young tortoises which just got out of their eggs. So I had the chance to take some pictures before an agent of the center asked me to leave the area. 😊

Next to the tortoises breeding center, it is possible to visit flamingos in lagoons. They are tirelessly looking for food, their heads are in the water most of the time, and taking pictures of them is almost a challenge!

To see it, you have to leave the breeding center on your right and walk about 250 m further.

If unluckily you don’t find them there, return to the breeding center and take the path to the right just before the entrance of the center. The trail leads to a second lagoon where flamingos are used to chill. 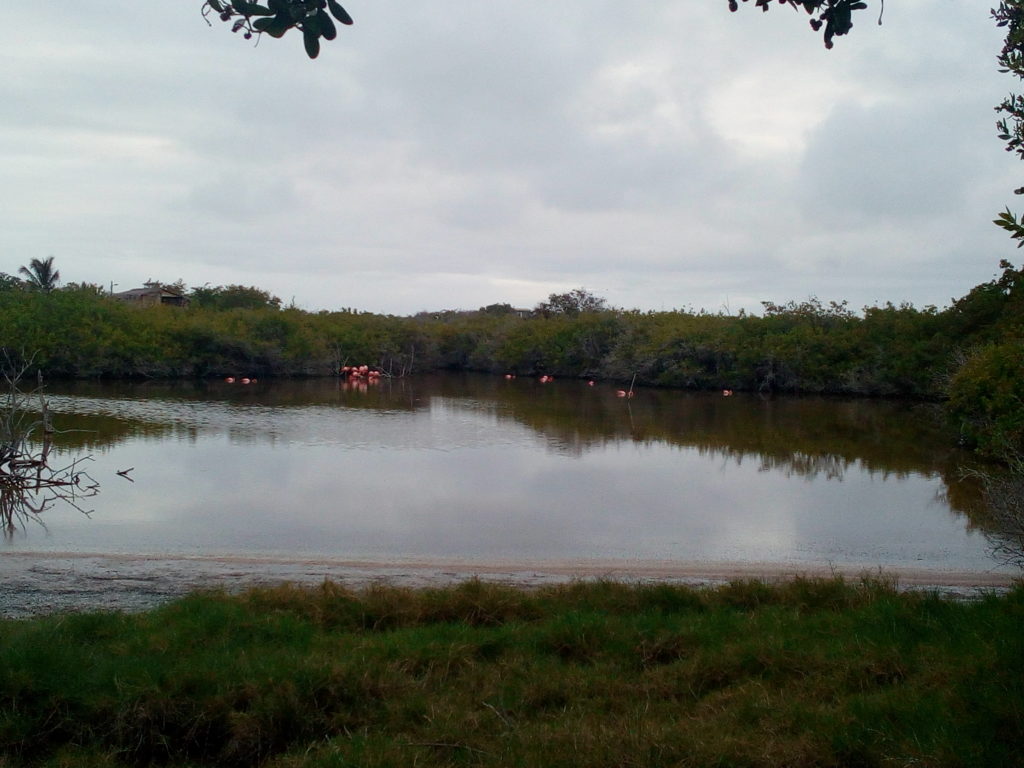 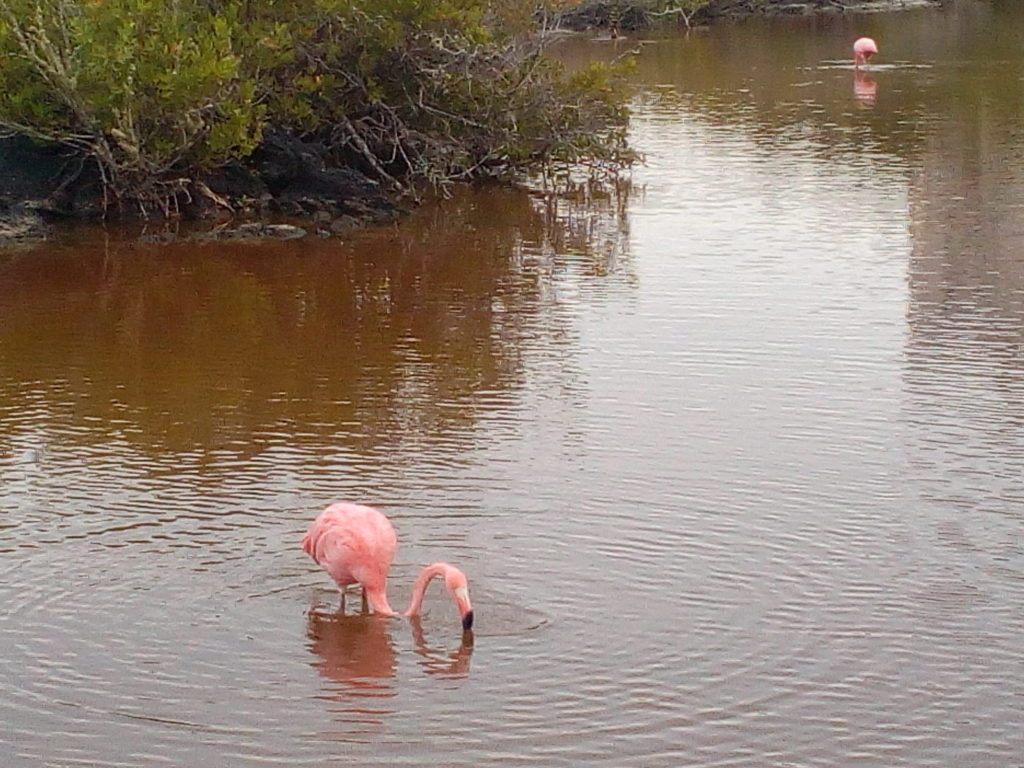 Just like in Santa Cruz, snorkeling is an essential activity on Isabela. La Concha de Perla is an adequate place for that. It is located next to the port of the island, 15-20 minutes walking from the center. 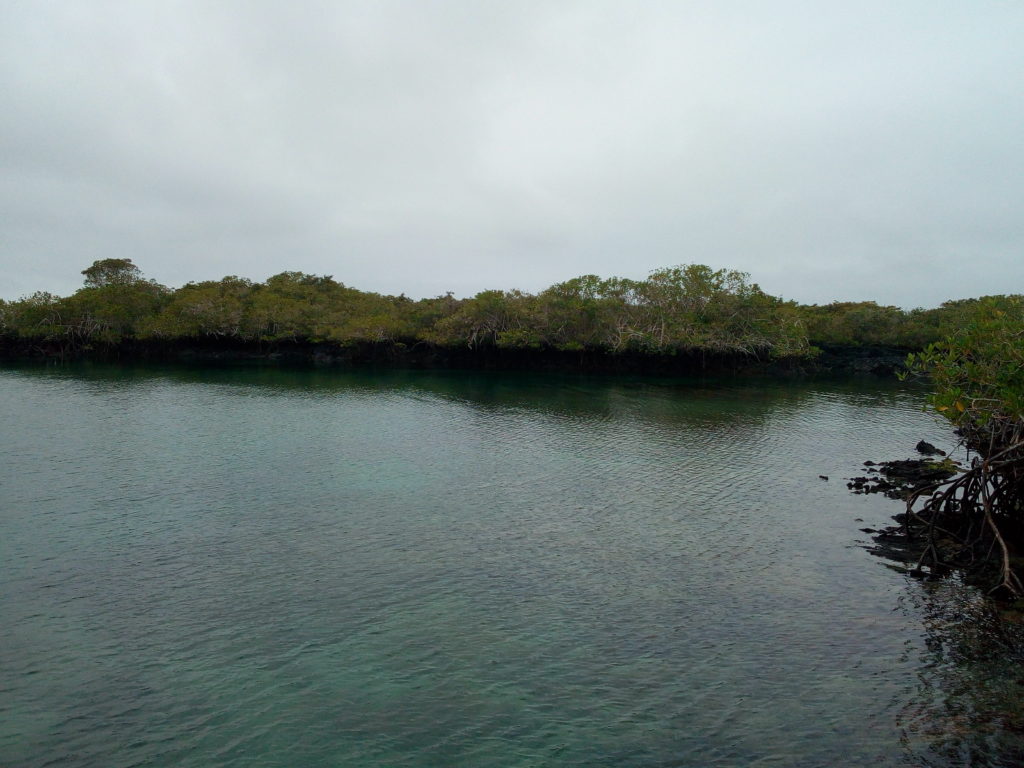 This natural pool with fresh water is home to many varieties of fish, with often bright colors and sometimes very long form. I also saw a “mini” sea turtle and a sea lion came next to me. Moreover, just by walking on the wooden path leading to Concha de Perla, we often see sea lions on the sides or sleepy on the bridge, which makes the passage difficult, or even acrobatic! 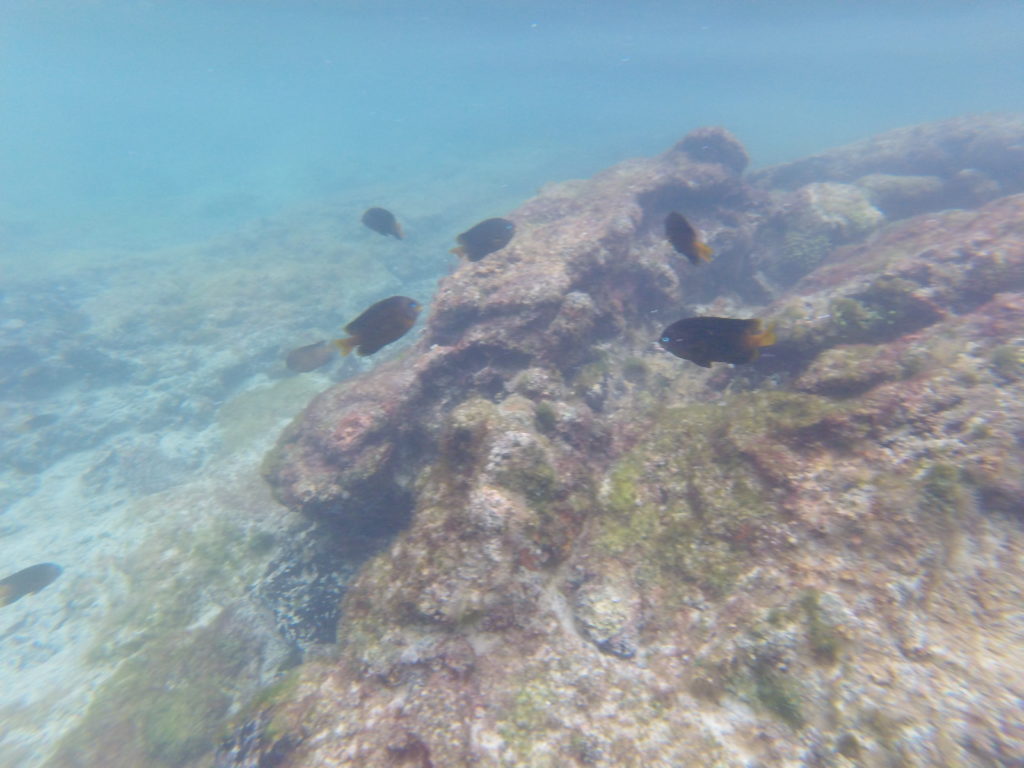 Finally, when you enter the water and swim to the right a little to the rear, there are mini tunnels under the water very nice to cross.

As with the Bahia Tour in Santa Cruz, I took the Tintoreras tour on Isabela to visit the Tintoreras islet and the surrounding beaches. The trip began with a boat tour where we went to see the blue-footed boobies  and the Galapagos penguins. These penguins are among the smallest of their kind, they don’t need to be big and covered with fat as temperatures are high in Galapagos. 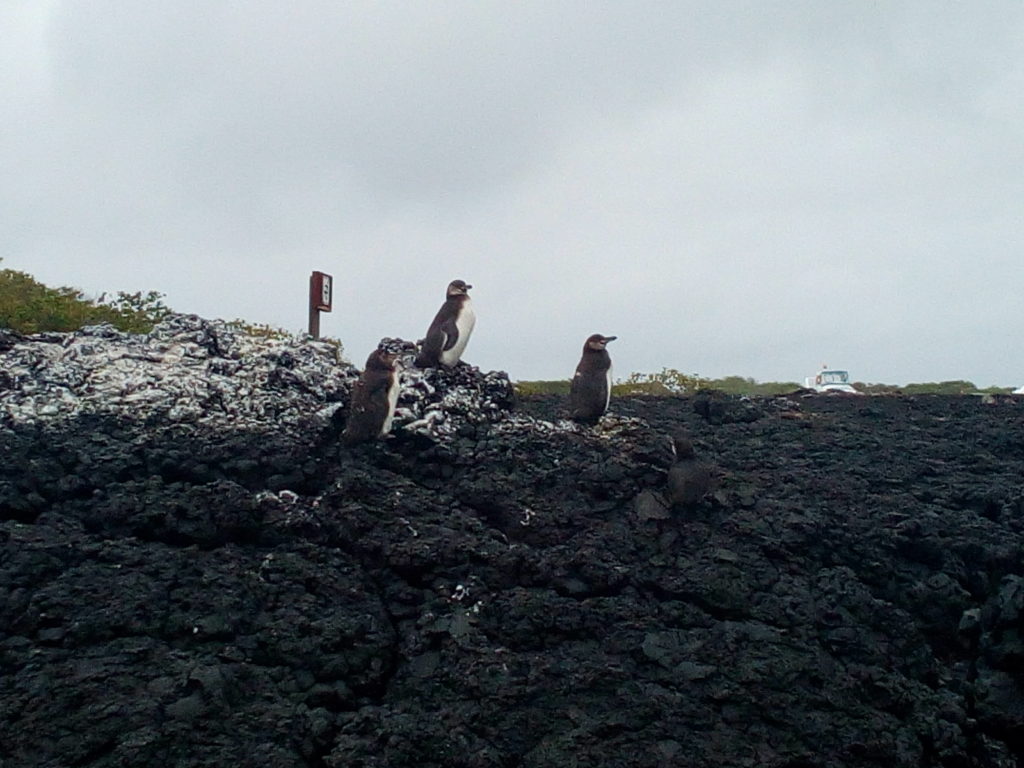 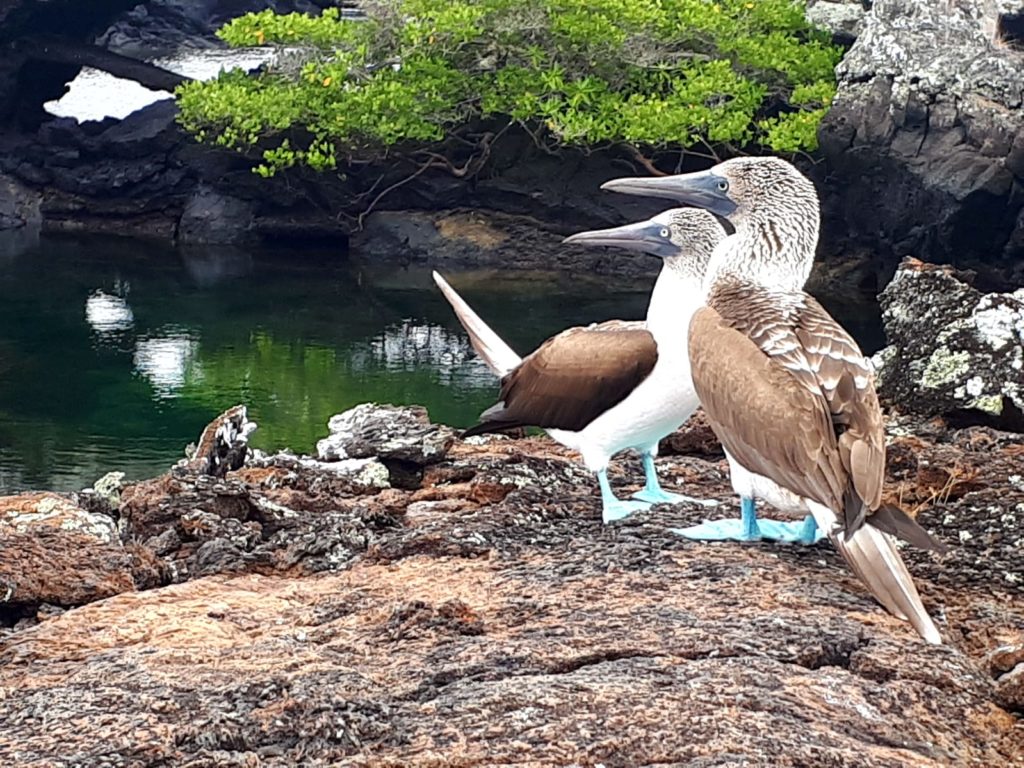 The blue-footed boobies owe the color of their paws to the carotene that they ingest in their diet. The legs are initially gray at their youth then turn blue when mature.

We then landed on the islet to see countless marine iguanas, hundreds, from the youngest one recently born to the adults who take care of them. We also saw lava lizards, very small and clearer, living in harmony with the iguanas.

Back on the boat, we went to a spot of snorkeling. We saw fish of different sizes, from the very small to very large ones, some with atypical forms (there are even a parallelepiped-shaped one!!), and fluorescent colors!

Then appeared a clan of sea turtles laying at the bottom of the sea, still, some of them covered with sand, looking like they have not moved for ages! 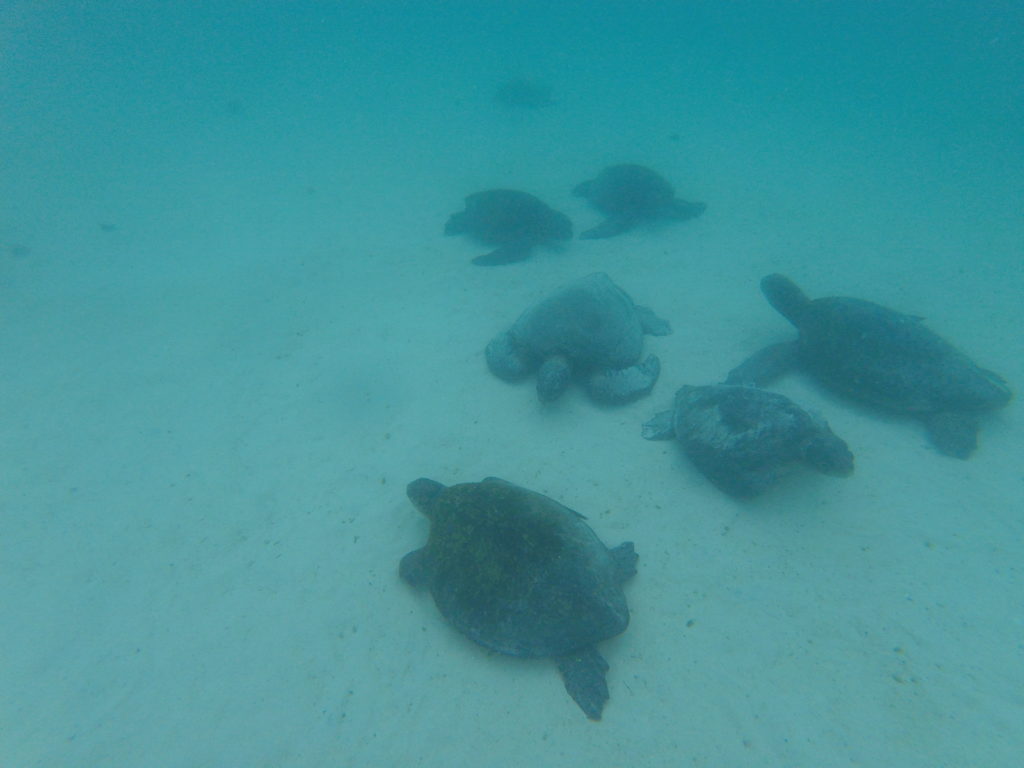 We also saw 2 types of rays. The first was relatively flat, with the ends bent upward. The second was HUGE with a tail as long as the first, but looking like “inflated”, convex, like half a huge balloon, motionless on the sand. 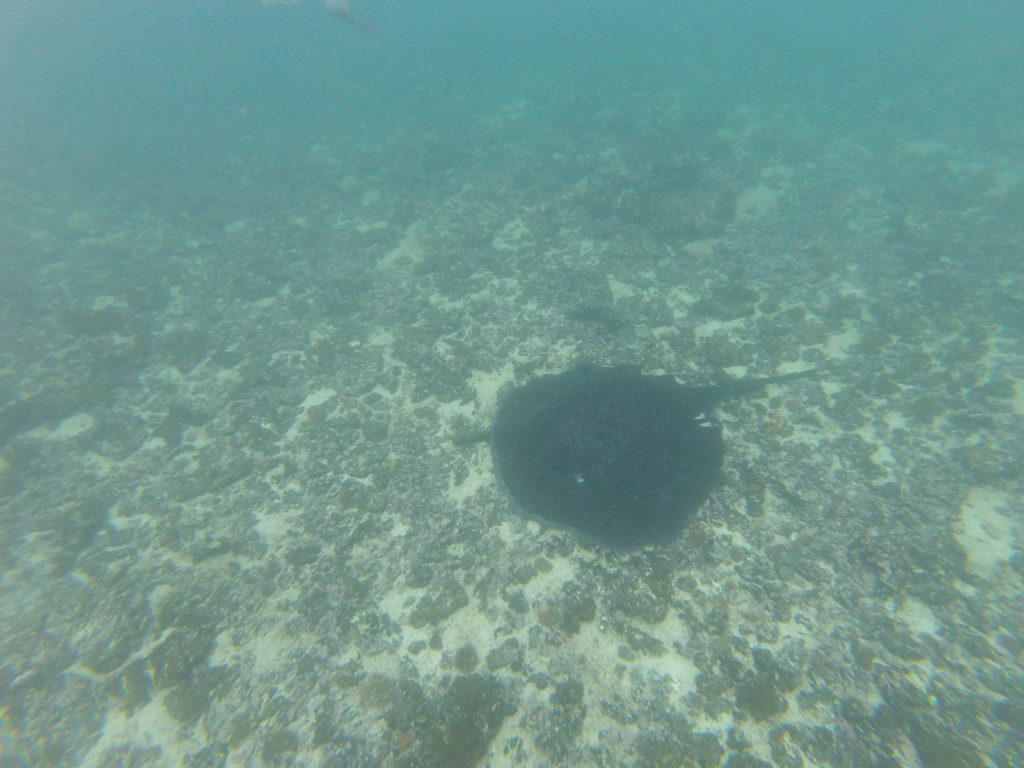 Our snorkeling session  ended perfectly with a small seahorse stuffed at the bottom of the sea, lying between the plants, totally motionless. 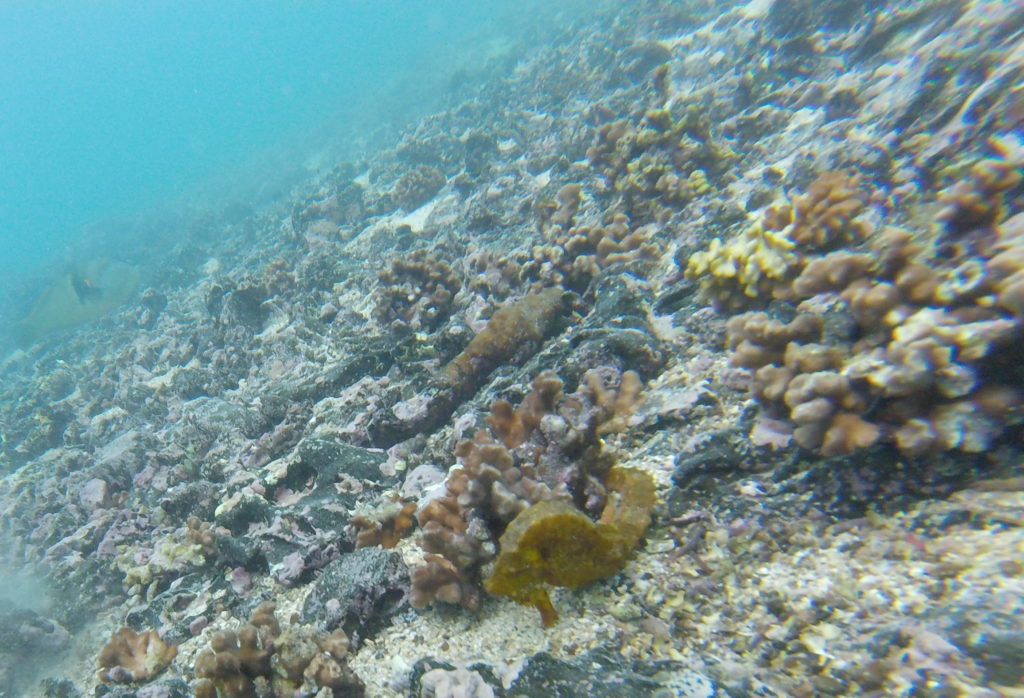 This camouflage and this posture allow it to blend in with the vegetation and avoid being eaten by rays and sharks. It also makes them extremely difficult for humans to find, and it took guide more than ten minutes to find this little creature!

The tour came to an end after 3 hours and we went go back to the harbor hosted by teasing moody sea lions!

The Tintoreras tour is in my opinion a good choice at reasonable price ($ 40), highly recommended!!

Los Humedales is a complex of trails 6 km in length. It is possible to visit it by walking or by bicycle.

For my last morning on Isabela, I went to rent a bike to cycle the Muro de las Lagrimas. Unfortunately (and in a sense luckily!), the rear tire of my bike bursted after a few hundred meters! So I gave the bike back to the agency and decided not to rent a second one.

I didn’t arrive at my initial destination but it seems that the trip is nice with pretty spots along the way. It ends with the wall of tears, a stone wall, built between 1945 and 1959 by the island’s detainees. The wall is 25m high and is said to have caused the death of thousands of people during its construction.

Other activities (like the visit of the craters Los Gemelos) and excursions with agencies (Los Tuneles for example) exist, but I did not have the opportunity to do them, that’s gonna be for the next time!

To follow my activities and advice on Santa Cruz, here they are!